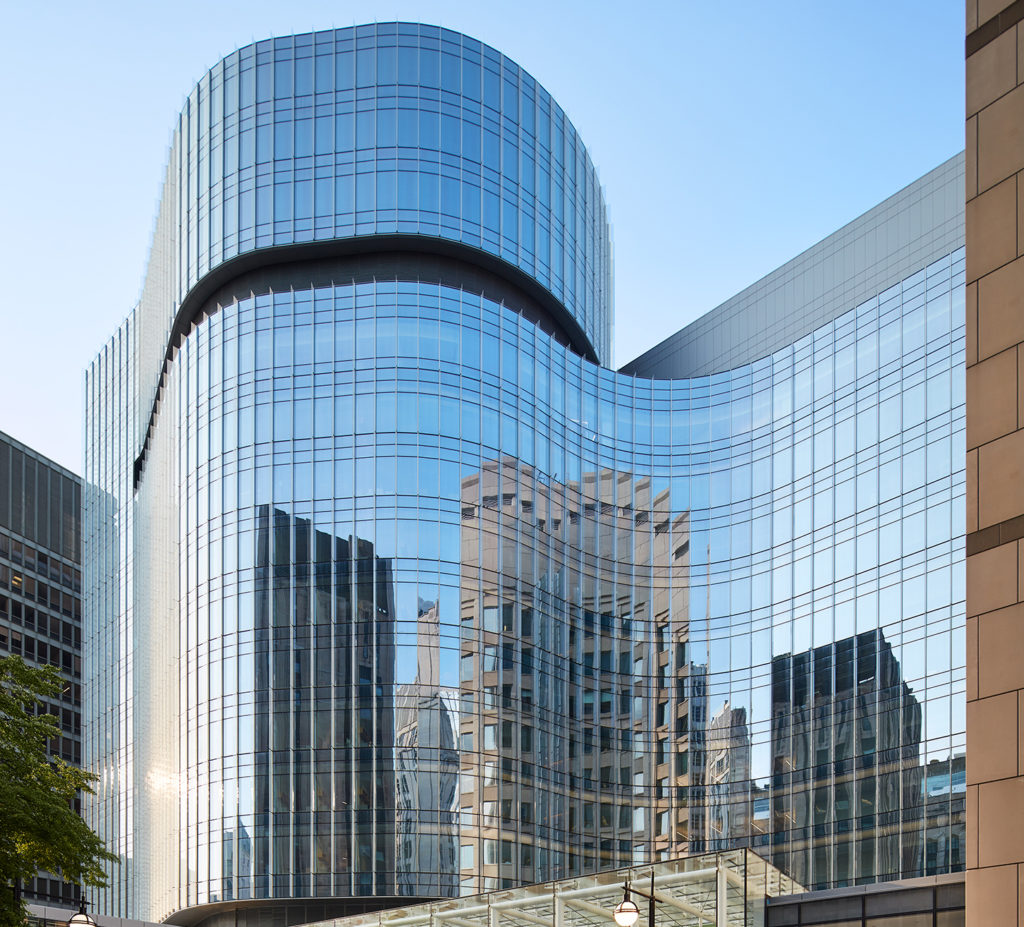 See a slideshow of photography of the Louis A. Simpson and Kimberly K. Querrey Biomedical Research Center, and a gallery of photos from the June 17 dedication of the new building.

Northwestern is the fastest-growing research enterprise among all U.S. medical schools – climbing from 39th to 15th in National Institutes of Health funding since 2002. The new center provides much-needed biomedical research space to continue Northwestern’s projected growth.

“The Simpson Querrey Biomedical Research Center is an inspired new home for discovery on Northwestern University’s Chicago medical campus,” said Eric G. Neilson, MD, vice president for medical affairs and Lewis Landsberg Dean of Northwestern University Feinberg School of Medicine. “Inside this modern new building, scientists will pioneer discoveries that will impact the practice of medicine and transform human health. Here, we will accelerate the pace of lifesaving medical science that fuels the local and national economy, near world-class campus partners and in a global city with unrivaled opportunities for biomedical commercialization and entrepreneurship.”

The new 12-story Perkins+Will-designed building, with striking curved-glass exteriors and light-filled laboratory neighborhoods, adds more than 625,000 square feet of research space to the Chicago academic medical campus. The building is designed for a future expansion that can more than double its size vertically, with up to 16 new floors in the second phase of construction.

The university already brings in more than $700 million in total sponsored research funding annually. The new facility will enable Northwestern to increase that by $150 million annually or $1.5 billion in the next 10 years with the additional space and investigators. It will also create 2,000 new high-paying, full-time jobs in the new space and is expected to generate an additional $390 million a year in economic activity in Chicago. In the building’s first phase, it created more than 2,500 construction jobs.

The Simpson Querrey Biomedical Research Center is named in honor of Northwestern Trustees Louis A. Simpson ’58 and Kimberly K. Querrey in recognition of their generous support that has advanced the University’s academic excellence and scientific discovery.

“The Simpson Querrey Biomedical Research Center represents one of the most important initiatives at Northwestern in recent years, and the fulfillment of promises the University made to the city of Chicago,” said Northwestern President Morton Schapiro, PhD. “It will help Northwestern’s research community to reach its fullest potential and to make unprecedented advances in improving life for countless millions.

“But while this center’s impact will be global, many of its benefits are intentionally local: It will serve as an economic engine within Chicago, working with nearby partners from education, business and government to create new opportunities for so many people who call this region home. The Northwestern community is immensely grateful to all who’ve helped make this moment possible, most notably Kimberly and Lou, whose generosity and dedication have been truly transformational for Northwestern.”

The building’s design is a direct response to the original 1925 campus master plan, which maximizes the use of limited urban land resources. Added greenery and open space at the street level along with an airy glass lobby create permeability and transparency in a dense urban neighborhood.

“Collaborations will explode on campus,” said Susan Quaggin, MD, director of the Feinberg Cardiovascular and Renal Research Institute. “I just know scientists will start talking about things that will lead to new directions and experiments, and bridge clinical and basic science.”

Quaggin, also chief of Nephrology and Hypertension in the Department of Medicine, said she is excited about her new proximity to potential collaborators, such as scientist Ali Shilatifard, PhD, chair of Biochemistry and Molecular Genetics and director of the Simpson Querrey Center for Epigenetics. This proximity will enable enhanced access to his bioinformatics teams, and “very hot” single-cell RNA sequencing technology, developed in his lab. This technology, unique to Northwestern, will unlock a deeper understanding of how glaucoma occurs and how to best develop new drugs, Quaggin said.

Close to identifying a lead therapeutic candidate for glaucoma, Quaggin says the larger lab space also will enable her to hire new scientists with stem cell, vascular and developmental biology expertise to advance her efforts to develop a bioengineered kidney and pancreas that grow blood vessels, which is “the holy grail,” she said.

The lab plan on each floor is designed around the idea of flexible “research neighborhoods,” with the goal of creating a vibrant hub for scientists and their teams. Each floor also has deliberate interaction space in the center to promote cross talk between the three lab “neighborhoods” and promote collaboration.

“The building was designed with elegance and transparency in mind, welcoming the public at street level and prioritizing varied space types, natural light and extensive collaboration areas for researchers within,” said Ralph Johnson, design director of Perkins+Will.

Flexibility is critical. “Research groups grow based on new discoveries and new funding,” said Elizabeth McNally, MD, PhD, director of the Center for Genetic Medicine and Elizabeth J. Ward Professor of Genetic Medicine. “What you want is space that is much more open to expand and contract to follow where the science is going. That’s what the new Simpson Querrey Biomedical Research Center gives us.”

Space in the Simpson Querrey Biomedical Research Center will allow McNally to hire new scientists to advance work on her new treatment for muscular dystrophy, a group of diseases that cause progressive weakness and loss of muscle mass in children, mostly boys. McNally is currently ramping up production of a newly discovered “super glue” protein that can be delivered orally to help reseal and repair damaged muscles. Preclinical testing will begin soon to ensure patient safety for a clinical trial.

The building includes floor-by-floor connections with the University’s Robert H. Lurie Biomedical Research Center as well as a new skybridge connection to the Searle Medical Research Building, enabling sensitive equipment and materials to travel long distances on campus with no exposure to Chicago’s climate.

The Stanley Manne Children’s Research Institute at the Ann & Robert H. Lurie Children’s Hospital of Chicago will occupy four floors of the new building, allowing investigators in pediatrics to share the same research space as Northwestern scientists across disciplines for the first time.

“We look forward to relocating our research facility just a short distance from Lurie Children’s and on the campus of our academic partners,” said Tom Shanley, MD, chair of Pediatrics at Feinberg and Lurie Children’s and president and chief research officer of the Stanley Manne Children’s Research Institute. “This building not only allows us to enhance our research capabilities across numerous scientific neighborhoods, but also more effectively leverage the proximity of our clinical and health service and policy research partners to identify greater translational opportunities to improve childhood health.”

The Stanley Manne Children’s Research Institute was named for investor, business executive and generous philanthropist Stanley Manne in 2014 in recognition of a transformative gift to sustain and enhance pediatric medical research at Lurie Children’s.

Additionally, the Simpson Querrey Biomedical Research Center will feature new public spaces, such as the Potocsnak Family Atrium, the 160-seat Simpson Querrey Auditorium, the Judd A. and Marjorie Weinberg Gallery, the Kabiller Student Commons and the Senyei Conference Center, with five conference rooms on the mezzanine level.

The building is on track to be LEED Gold Certified, signifying a strong commitment to sustainability and energy efficiency.