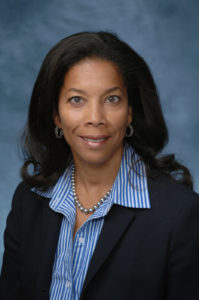 Alexis Thompson, MD, MPH, professor of Pediatrics in the Division of Hematology, Oncology, and Stem Cell Transplantation, has been named president of the American Society of Hematology.

The American Society of Hematology (ASH) is the largest hematology organization in the world, with more than 17,000 members hailing from almost 100 countries.

“I am honored to serve as ASH president,“ said Thompson, who is also associate director of Equity and Minority Health at the Robert H. Lurie Comprehensive Cancer Center of Northwestern University. “I look forward to working with ASH staff and volunteers on advocacy to increase research funding and improve access to high-quality medical care and new life-saving treatments for both malignant and non-malignant blood disorders.”

Thompson served as an ASH councilor from 2010 to 2014, and spent 2017 as president-elect of the ASH. She assumed the presidency at the 59th ASH Annual Meeting, held in December in Atlanta.

Thompson said one of her priorities in 2018 will be working to strengthen the hematology trainee pipeline — particularly in non-malignant hematology, a branch of hematology that focuses on conditions such as sickle cell disease, thrombosis, hemophilia and marrow failure. According to Thompson, novel approaches to enhance education in benign hematology at all levels is a priority of the ASH Educational Roadmap.

Thompson is also interested in promoting international collaborations and capacity-building efforts particularly as it relates to sickle cell disease.

“The ASH has recognized that there is a need for focused attention on sickle-cell disease both in the U.S. and also globally,” Thompson said. “I want to concentrate on ASH’s global strategy to promote the best science and patient care throughout the world, and to foster international collaborations in hematology, including expansion into regions with unmet scientific and medical need, such as Latin America and Africa.”

Northwestern Faculty Elected to Society for Clinical Trials Board