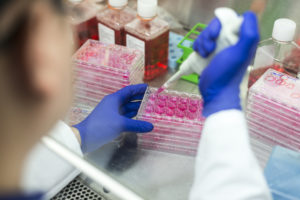 Northwestern University Feinberg School of Medicine rose to 16th place among U.S. medical schools in funding from the National Institutes of Health (NIH) in 2016. These rankings are reported annually by the Blue Ridge Institute for Medical Research.

The Blue Ridge analysis represents grants awarded between October 1, 2015, and September 30, 2016. This year is Northwestern’s highest ranking to date. It represents an increase of two spots over 2015 and five spots over 2012, when the medical school was ranked 21st in the nation.

“These prestigious NIH awards enable our scientists to pursue innovative and groundbreaking medical discoveries,” said Eric G. Neilson, MD, vice president for Medical Affairs and Lewis Landsberg Dean. “Northwestern’s remarkable growth in research funding is yet another sign that we are a world-class destination for outstanding research and education.”

Individual departments at Feinberg also ranked highly in the report: Twelve departments ranked among the top ten in their specialty for NIH funding, while an additional two ranked in the top 20:

Award figures are obtained by Blue Ridge from the Research Portfolio Online Reporting Tools (RePORT) at the NIH. The report’s calculations include direct and indirect costs, but do not include contracts or other specialized mechanisms.